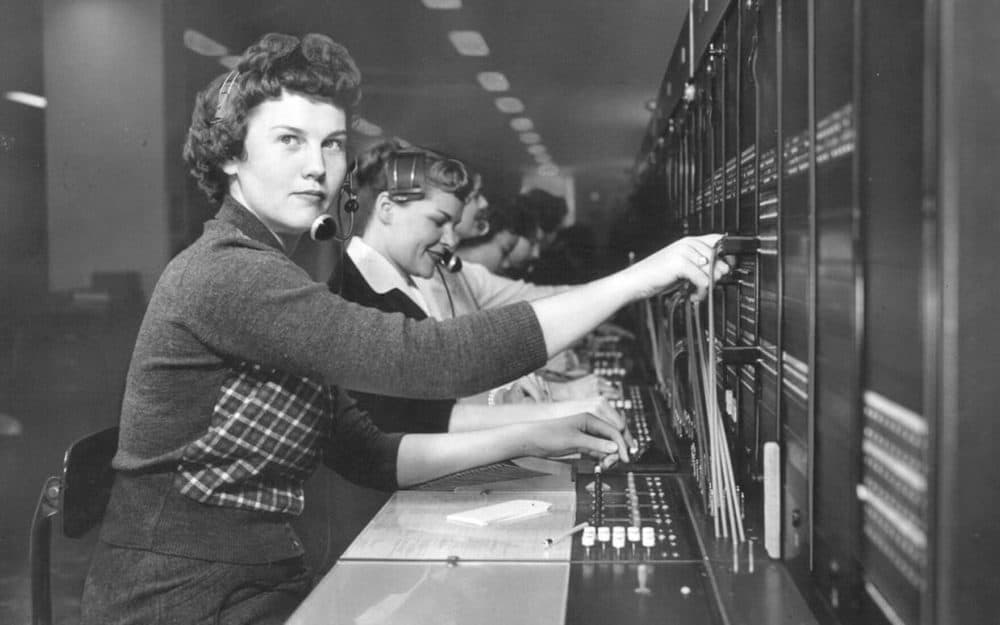 Before smartphones, most people stayed in touch with landlines.

And before direct dialing was common, some calls were handled by switchboard operators.

During the 1950s, more than 220,000 operators were employed by the Bell system alone. Most of them were women who had to be courteous, quick and patient under pressure.

And at a recent meeting in Maine, some former operators shared some highlights about what they say is hard but rewarding work in simpler times.

Until the 1970s, the assistance of a switchboard operator was often required for person-to-person calls, collect calls, or to report a crime.

“Operator, can you call me the police, it’s an emergency.”

Operators were based at local switching stations called telephone exchanges where they monitored calls that appeared as lights on a cord panel.

“What was a board with little holes for different cities and when the light came on, that’s what we responded,” says Shireen Desmond, a former operator.

Desmond said she would offer her standard salute then: “‘Shireen, how can I help you?’ We had to say our name. “

The caller would then provide a phone number. The operator would connect the caller to the corresponding circuit. And There you go ! What could go wrong?

“Well, I got plugged into Dixfield once. And there was a young boy and he said the house was on fire, ”explains Lorraine Luce, who had just started as a switchboard operator. She says she was so upset that she forgot about her training to deal with an emergency. Fortunately, she says, a supervisor was quick to step in.

“There is a certain procedure to follow that completely escaped me and I shouted, ‘Fire!

Desmond and Luce were among a group of 30 former operators who recently swapped stories over lunch at a restaurant in Auburn, Maine. Most women are between 70 and 80 years old. Some started for the telephone company known as Ma Bell right after high school in the 1960s. Back then, there was a strict dress code: no pants and no mini skirts. And everyone was supposed to pay attention to their Ps and Qs, even when customers weren’t, like this man whose call is in AT&T archives.

Male: “This is not the number I asked for.”

Operator: “Wait a minute, I’ll give you my service assistant.”

Operator: “I’ll give you my service assistant, just a second, please.”

Most of the customers, the women say, weren’t generally that rude. They seemed to enjoy having a friendly and helpful voice online.

Women did not start in the role of operators. AT&T corporate historian Sheldon Hochheiser has said that when phones first came online in the 1870s, teenagers were the ones answering calls for help. There was just one problem …

“They acted like teenagers,” Hochheiser says. “Sage-cute, not polite, not necessarily reliable.”

Hochheiser says it didn’t take long for the Boston Dispatch Telephone Company to realize that it might be better to hire adult women as operators. The first was Emma Nutt in 1878. Nutt did the job so well that she was said to be able to remember every number in the local phone book.

Operators were never supposed to listen to private calls, but Gail Simpson says that sometimes when things were unusually quiet, they could listen. She remembers a story that has become legendary among her peers. It was about a man using a pay phone to call a woman. The operator was supposed to alert him when his first three minutes had elapsed.

Although they are traditionally underpaid compared to men, Simpson says being a telephone operator was a good option if you didn’t have a college degree.

“I had five children and my insurance covered 99% of their births and medical care. Life insurance, retirement, retirement. Few companies offer this these days, ”says Simpson.

Simpson worked for the telephone company for 32 years. And as the lights went down on her old dashboard, she and others say they have fond memories of the pre-smartphone era where calling someone was more complicated, but operators were always ready. to offer their personal touch.

This story is a production of the New England News Collaborative. It was originally published by Maine Public on December 6, 2021.