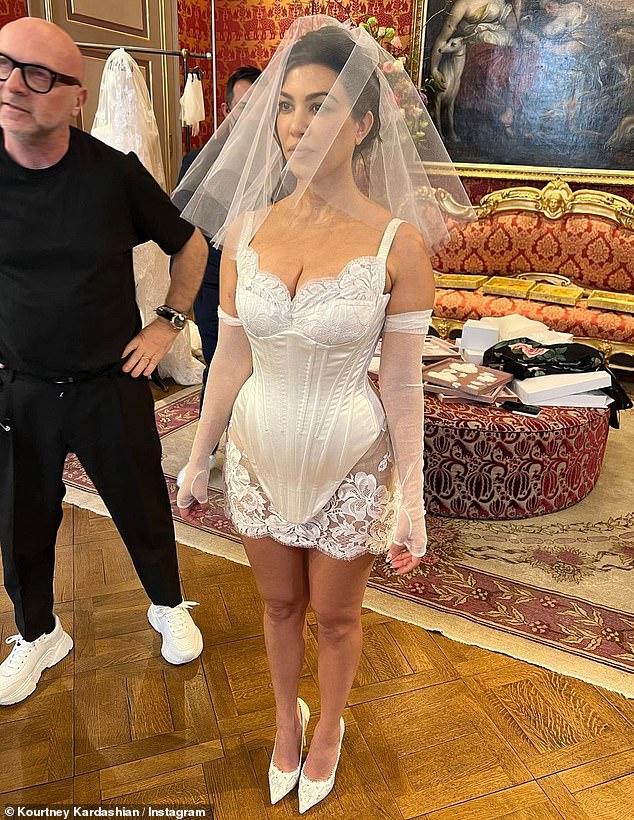 The reality star, 43, shared behind-the-scenes photos of the process of creating her mini wedding dress and embroidered veil with the designer, 64, by her side.

The TV personality wore the ensemble to a star-studded religious wedding ceremony in Portofino, Italy, where she said “yes” to Travis Barker earlier this year on May 22.

Birthday wishes: Kourtney Kardashian, 43, posted a birthday tribute to her wedding dress designer, Domenico Dolce, 64, on her Instagram on Saturday

The media influencer hopped on her Instagram to pay tribute to Domenico who helped design her one-of-a-kind corseted wedding dress.

She uploaded a series of photos of herself trying on the mini dress as the talented designer made changes and adjustments.

“I will forever cherish every moment with you designing my wedding dress, the endless laughter and your vision and making me feel like a princess.” 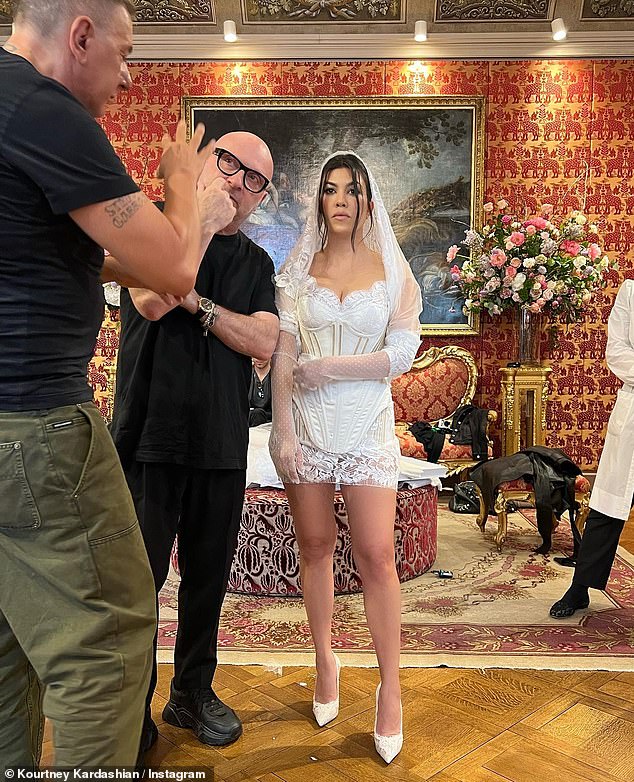 The process: The reality TV star showed behind-the-scenes photos of the process of making her wedding dress with the designer ahead of her wedding ceremony in Italy 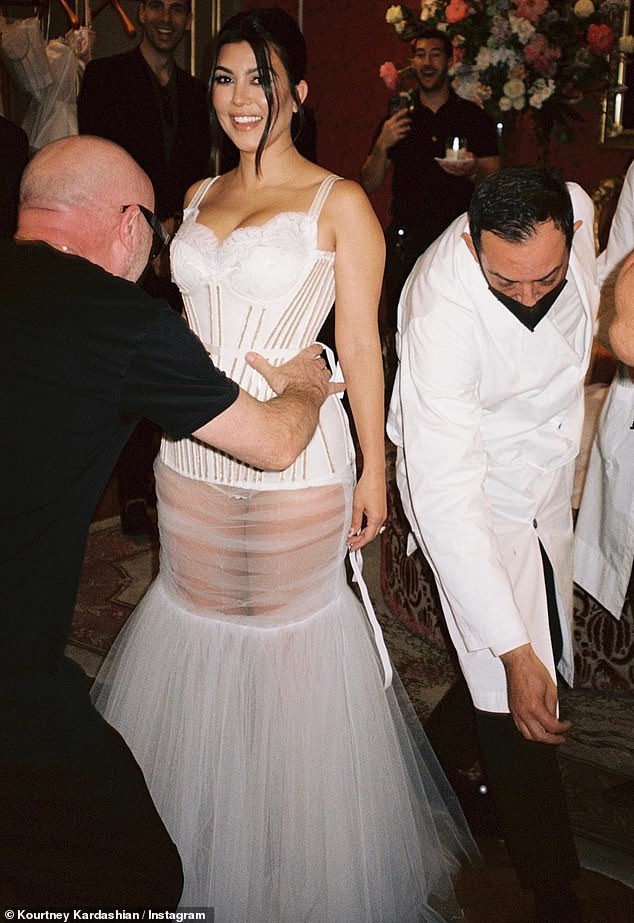 Special day: The TV personality flashed a big smile on her face as her dress slowly came together

Concluding her message to the luxury designer, the mum-of-three added, “I love you and I hope you have the most magical birthday ever!”

The dress is inspired by Italian lingerie and is made of various materials such as silk, lace and satin, according to Harper’s Bazaar.

The cathedral-length embroidered veil contained a large depiction of the Virgin Mary along with the words Family Loyalty Respect underneath, which referenced one of her husband’s tattoos.

The successful businesswoman added a pair of tulle, sheer gloves that reached her elbows, and completed her look with a pair of white closed-toe heels. 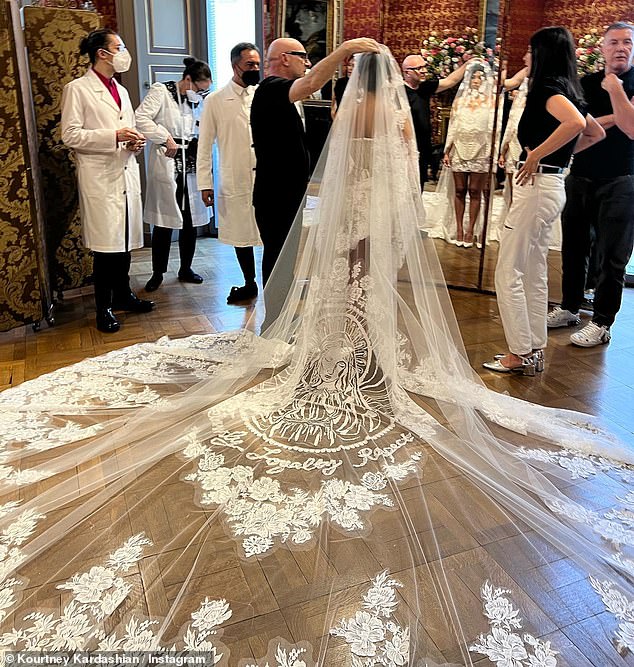 The Veil: Kourtney’s veil contained a depiction of the Virgin Mary with the words, Family, Loyalty and Respect underneath which referenced one of Travis’ tattoos 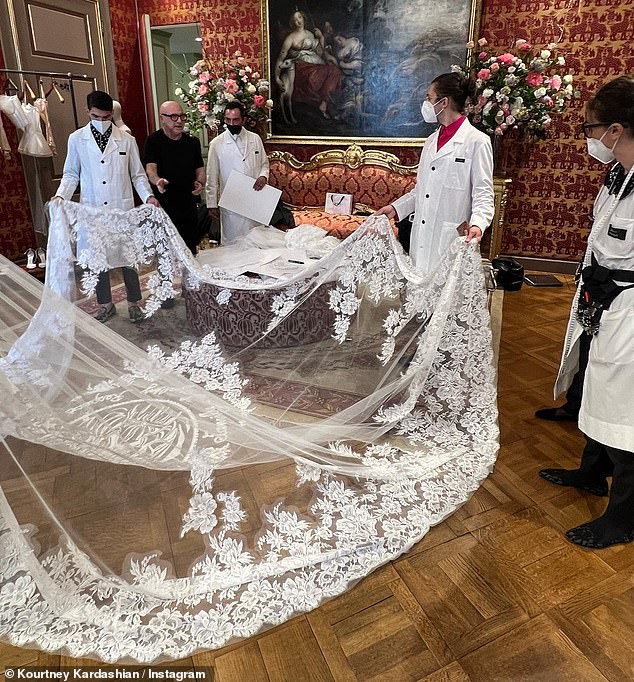 The star has been spending time with her husband, who has been on tour as a drummer for his band, Blink-182, following a recent health issue.

After undergoing an endoscopy to remove a polyp, he suffered from pancreatitis which sent him to hospital a few months earlier in June.

Kourtney shared some adorable snaps of them together backstage at a concert in Indiana holding hands and Travis holding his wife in a close, loving embrace. 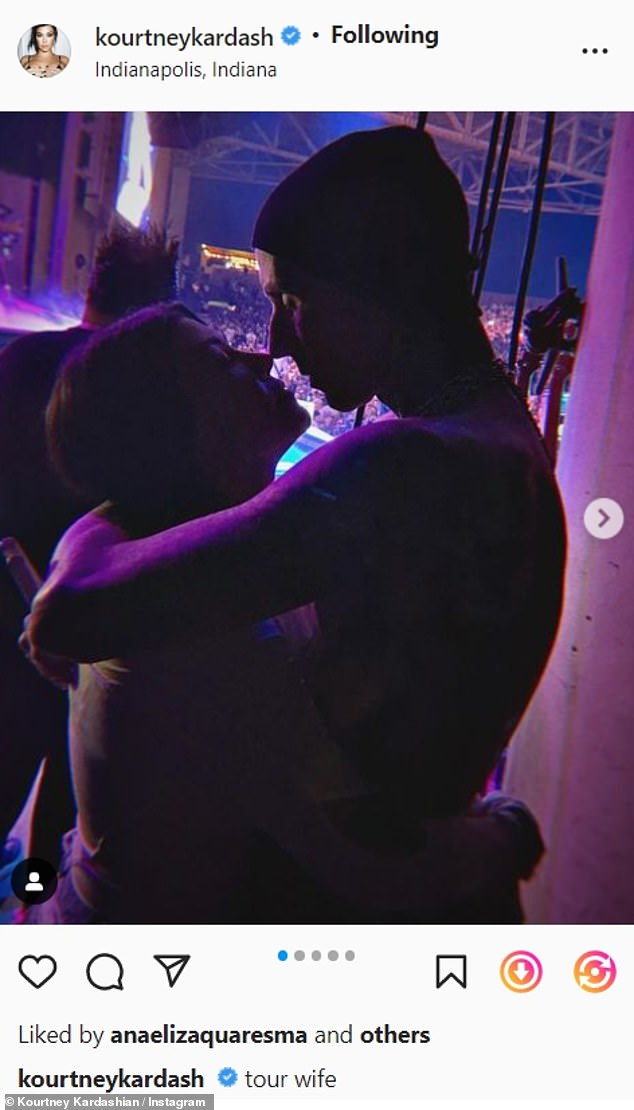 Tour days: Kourtney uploaded a separate post to her Instagram showing a series of photos of herself on tour with her husband as he plays drummer for her band, Blink-182 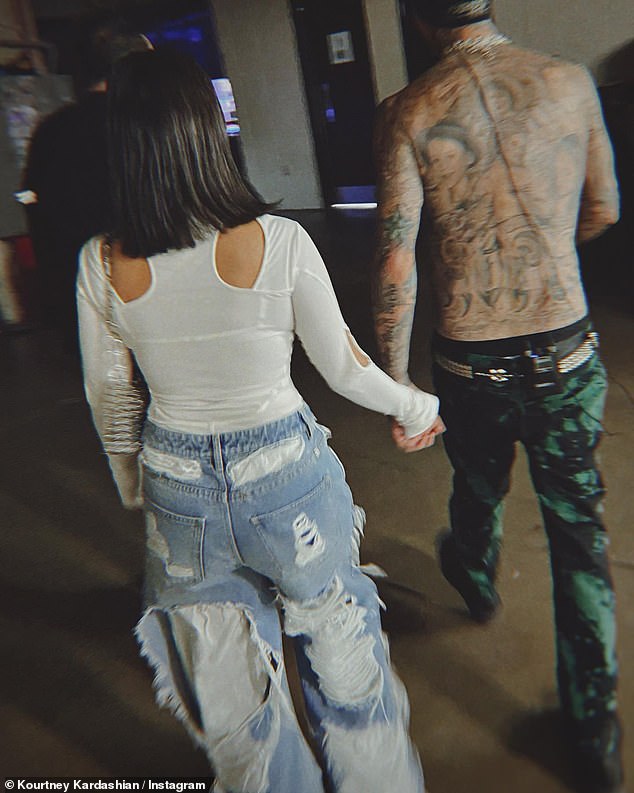 Support: The beauty shared a sweet photo of both hands holding each other backstage during a performance 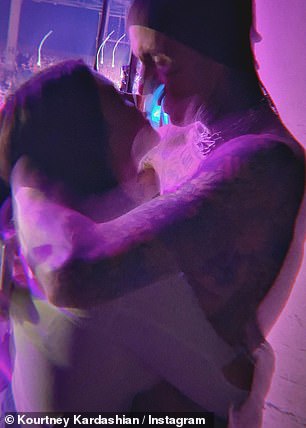 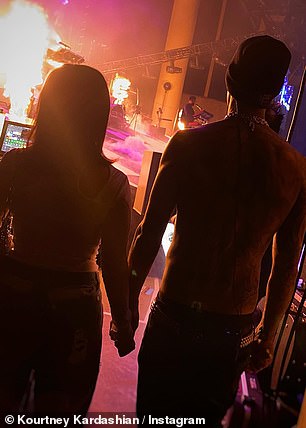 A kiss before the show: Travis was pictured pulling his wife into a loving embrace before his performance

In an interview with Billboard, the musician opened up about his relationship with the reality TV star.

“We are very similar, back to the wall,” he explained. “We don’t have a give up, and I need someone like that in my life.” 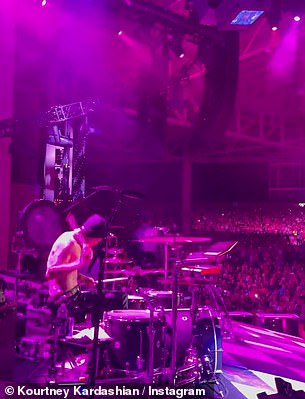 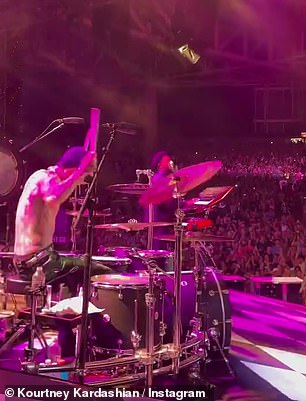 Proud wife: Kourtney shared a video of Travis playing drums at a concert in Indianapolis, Indiana

Later Saturday, the beauty uploaded a short reel to her Instagram Story as she relaxed in a chair in a hotel room in Cleveland, Ohio, while continuing to follow Travis.

Kourtney took a quick selfie video of herself wearing a black silk and lace long-sleeved shirt.

Her hair was parted in the middle and up in a bun, with long locks falling down the sides of her face.

In the video, the entrepreneur filmed herself and then changed the camera to show the view of the city from her bedroom. 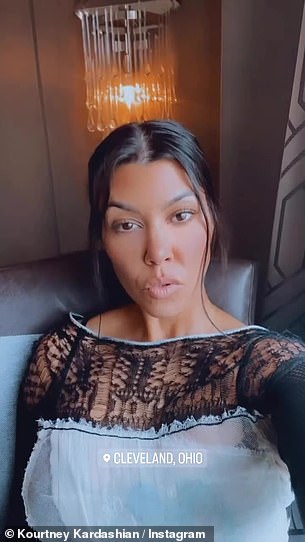 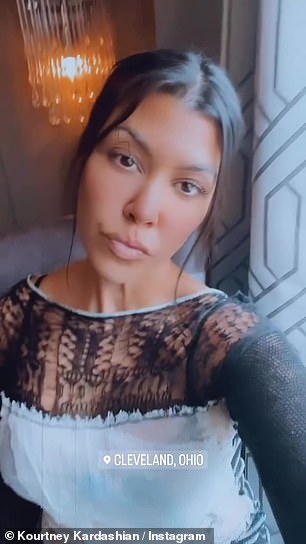 Tour wife: Kourtney shared a new Instagram story of herself relaxing in a hotel room in Cleveland, Ohio 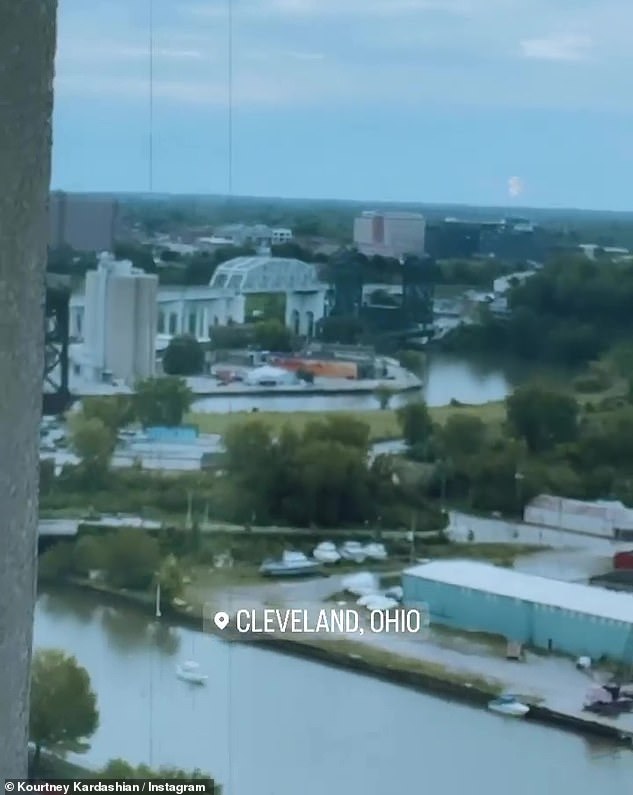 A room with a view: The beauty showed off her view of Cleveland from her hotel room

Despite sticking by her husband for part of his band’s tour, Kourtney still made time to promote her lifestyle and wellness website, Poosh.

The photo showed the star posing in a black one-piece swimsuit that showed off her fit physique and toned legs as she posed by the crystal clear water.

Her long hair was slicked back with her hands as she faced the direction of the hot sun. 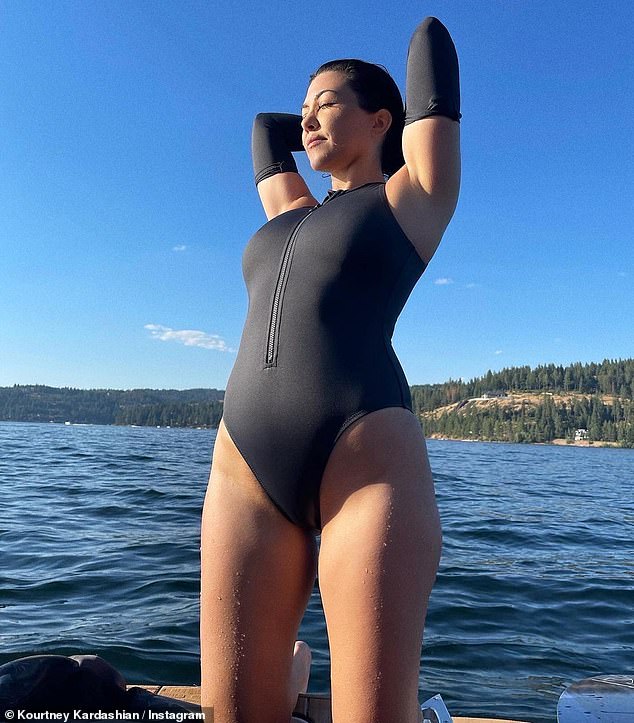 Hard at work: Despite being on tour with Travis, Kourtney is still focused on her company, Poosh 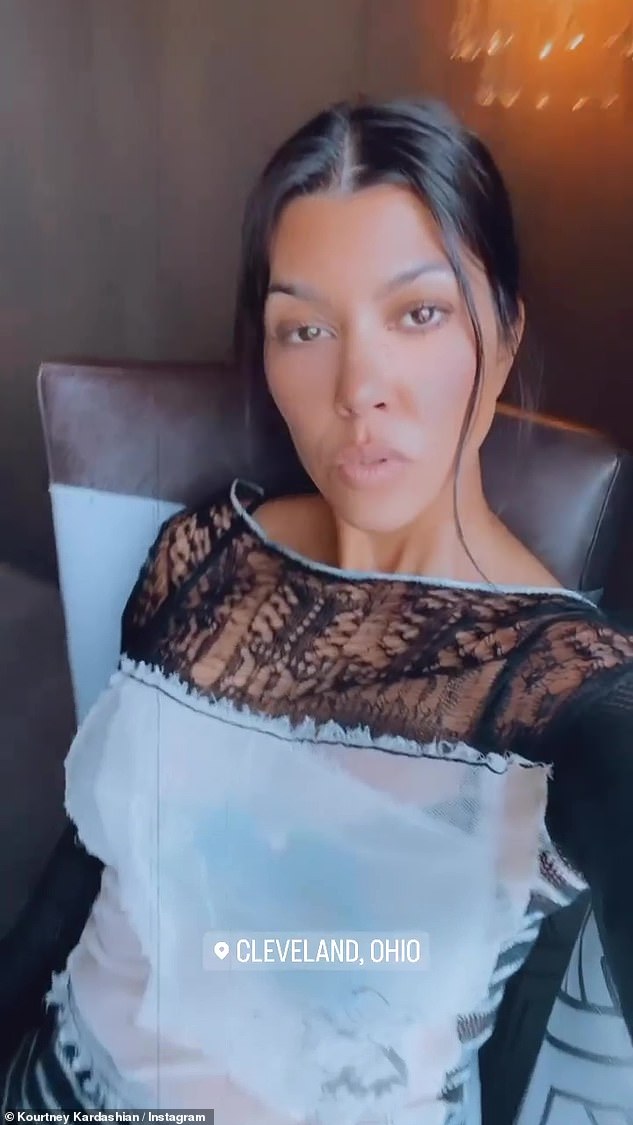 Break time: The star appeared to be enjoying a short break from her busy schedule as she traveled with her husband across the country 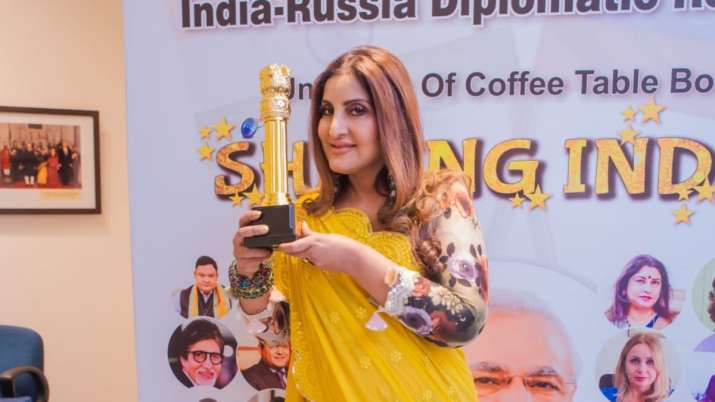 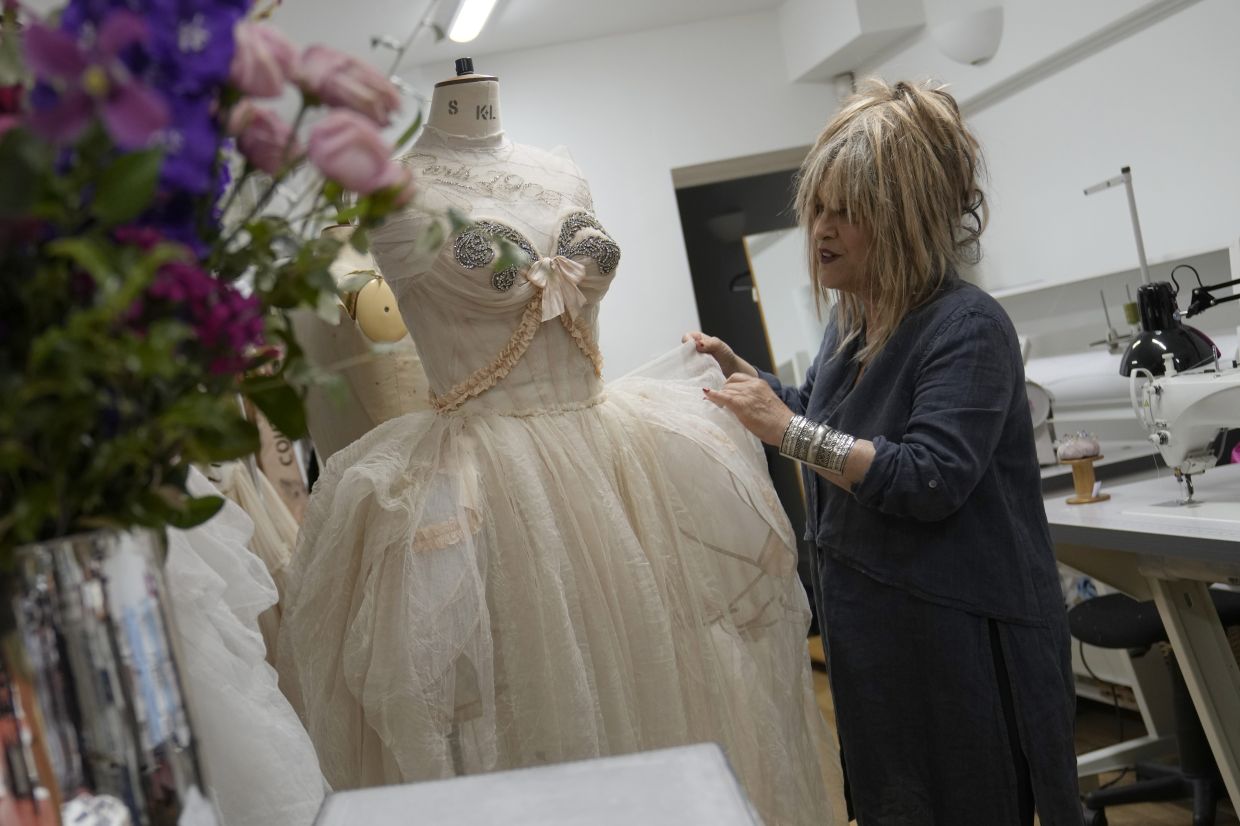