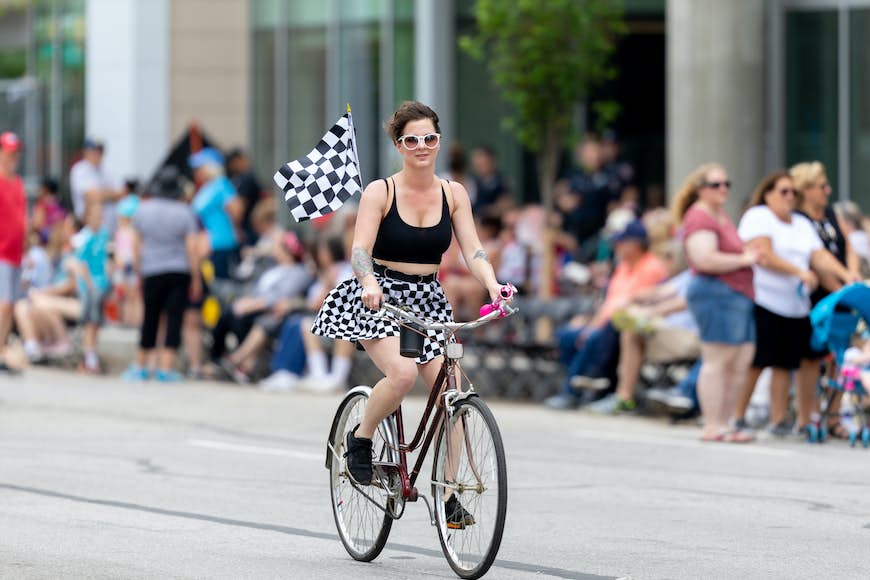 With its vibrant public art, thriving craft beer scene, iconic museums and central state park, Indianapolis is much more than the host city of the world’s largest one-day sporting event, the Indianapolis 500.

While car culture is indeed king in Indy, countless public trails and a central canal make Indiana’s capital easy to explore on foot, scooter, bike, kayak, or in other ways. All over the city, public art installations shine.

It’s no surprise that many visitors flock to this vibrant Midwestern metropolis. So here is our list of everything you need to know before visiting Indianapolis.

Stay in Fountain Square, Chatham Arch or Broad Ripple to experience small-town charm within the city

Although Indianapolis is a big city, each of its neighborhoods has a distinct personality that gives it a small-town feel. If you don’t want to stay in a downtown hotel, opt for a boutique hotel or Airbnb in a neighborhood that matches your mood.

Whether you choose to stay downtown or in a neighborhood enclave, you’re sure to experience the small-town Indiana vibe and meet down-to-earth, friendly people.

Ready to start planning? Sign up for our weekly newsletter and get 20% off your next guide.

Park your car and explore Circle City on foot

Indianapolis is known as “Circle City” because of Monument Circle, a square in the heart of the city where four streets converge: East and West Market Streets and North and South Meridian Streets. An attractive free attraction, the large Soldiers and Sailors Monument stands in the center of the circle. This intersection is not the only reason why Indianapolis is nicknamed the “crossroads of America”: the city is also at the junction of four major highways (Interstates 65, 69, 70 and 74).

Downtown Indianapolis is smaller and can be easily explored on foot. Thanks to its grid system, the city is easy to navigate – just be aware of a number of one-way streets. While public transport is limited to the public bus system, the network is extensive. You’ll likely need to get in a car to visit key sites away from downtown, including the Children’s Museum of Indianapolis and the Indianapolis Motor Speedway.

Indy has a lot to see on the bike

Indianapolis was the backdrop for Come off, a 1979 blockbuster film about a working-class teenager obsessed with the Italian cycling team. Some 40 years later, the city remains a fabulous place to explore on two wheels. Collect your ride at the Indiana Pacers bike share or take one of the many Lime scooters found throughout the city.

Bike paths criss-cross Indy. Indianapolis Culture Trail Bike Route 8.1 loops through downtown, with three branches. The northeast one runs along Massachusetts Ave before connecting to another popular path, the Monon Trail, while the southeast spur follows Virginia Ave through the Fountain Square neighborhood. To the south, a third branch connects the Indiana Convention Center and Lucas Oil Stadium.

Dress for the fluctuating weather

Midwest weather can range from sunny and warm to rainy and cold, so you’ll want to dress in layers. The average daily summer temperature persists above 74°F, with an average high of 83°F in July, the peak summer month. (Bring a swimsuit to cool off at a local pool or water park.) The winter season lasts three months, from December to the end of February, with average daily temperatures below 46°F, so bring a good winter jacket. winter.

Fall is one of the best times to visit Indianapolis, when the air is crisp and the trees are decked in their best autumnal look. Spring is also pleasant, with mild weather and flowers growing in the city’s gardens.

See the city center differently with an offbeat means of transport

Plan your visit around the Indy 500

Indianapolis’ key annual event, the Indy 500 draws thousands of spectators and tons of excitement to the Indianapolis Motor Speedway’s 2.5-mile-long oval track. A permanent capacity of 257,325 seats makes it easy to find tickets. Just be sure to book ahead: Ticket sales typically open in late fall for the Memorial Day weekend event.

If you’re not there for the big event, you can still learn about the famous race’s history year-round at the Indianapolis Motor Speedway Museum, home to one of the world’s largest collections of vintage race cars, including more than 30 Indy 500 winners. The museum offers 30, 60 and 90 minute tours that take visitors behind the scenes of the Speedway, which dates back to 1909.

Indianapolis is an increasingly popular destination for craft beer lovers (and was recently voted Top Five Beer City). Five blocks from the Speedway, Daredevil Brewing Co offers a wide range of craft beers along with a bustling 8,000 square foot patio. Chilly Water Brewing Company pairs its hoppy IPAs with hoagies, while Bier Brewery specializes in Belgian dubbels and German hefeweizens. To enjoy a beer while sightseeing, hop on the Pickled Pedaler’s 12-passenger BYOB bike. And don’t forget to download the Indy Craft Pass, a mobile passport app that lists the best craft breweries and distilleries in town: if you check in at eight locations, you’ll earn an Indy Craft Pass t-shirt.

You shouldn’t leave Indy without sampling Indiana’s unofficial state lunch: the Hoosier Pork Tenderloin Sandwich. This mega pork chop is served breaded, fried and nestled between two slices of bread. The sandwich is so popular that the state has even created a Tenderloin Lovers Culinary Trail. You can find the sandwich on menus all over town; we particularly like the spicy version of the classic Steer-In drive-in restaurant.

Save room for a slice of the Indiana state cake, too. Hoosier Sugar Cream Pie is made from a single crust with a simple and simply delicious filling of butter, vanilla, cream and brown sugar.